If you’ve made the wise decision to buy Mike Neville’s latest book, ‘Crime and the Craft’, you will have read the bizarre tale of the Yorkshire inventor and Freemason, Thomas Denton, who went to the gallows in 1789 in London in a merry mood “as if he had gone to a wedding”.

Along with his friend, John Jones, who may also have been a Yorkshire Freemason, Denton had been sentenced to death for the treasonous offence of possessing implements to make counterfeit coins. His coins were so well made that they could not be proven to be fakes – hence the ‘possession of implements’ charge.

Denton’s full true story in Mike’s book (which also involves robots, an odd device for sexual therapies and Nelson’s mistress, Lady Emma Hamilton) is well worth the price of the book on its own!

In the mid to late 1700s, the offence of ‘coining’ (i.e. ‘diminishing’ or ‘clipping’ gold or silver from the edges of genuine coins to melt and make into fakes) was widespread, particularly in Yorkshire. One of the most notorious gangs involved, now known as the ‘Cragg Vale Coiners”, was led by ‘King’ David Hartley who was convicted in 1769 and hanged in York in 1770. Cragg Vale, although fairly close to Halifax in the West Riding of Yorkshire, was a remote place in those days so it suited the coiners well.

Many coins from other countries, particularly Spain and Portugal, were circulating freely in Britain, and these were particularly susceptible to being tampered with. By the 1770s, it was estimated that gold clippings amounting to 9% of the weight of all the gold coins in circulation had been melted and turned into fakes with a face value of three and a half million pounds (today’s equivalent value is about 5.8 BILLION pounds based on average earnings).

So it is not really surprising that, in the late 1760s, another group of coiners who met at the Bacchus Tavern in Halifax town centre (pictured here and demolished in around 1937) came up with the idea of forming a Masonic Lodge to use as an excuse for their regular meetings and conceal their real purpose. 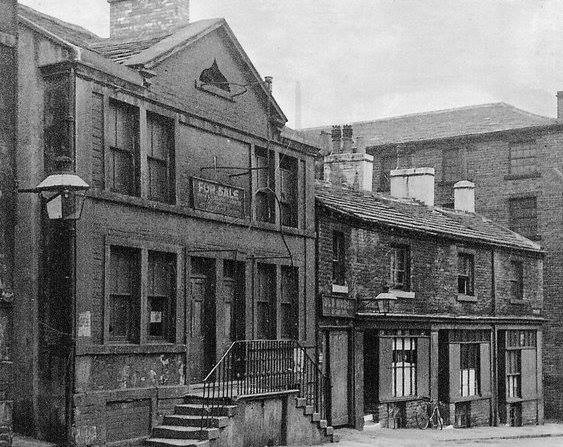 The Bacchus Tavern in Halifax photographed in around 1936

As attempts were underway to establish the new Lodge, the members of what is now the Lodge of Probity No 61 in Halifax were getting worried and in a postscript to a letter to Grand Lodge dated December 1768 they wrote “We are sorry to inform you that a set of persons or people are forming themselves in an illegal manner in this town who probably may apply for a warrant; we suppose they will be a discredit to the fraternity”. Despite this, in 1769, Grand Lodge granted a warrant to the Bacchus Lodge which, in the few years of its existence, was numbered 383, then 268 and finally 269.

From its start, the Bacchus Lodge made regular charity contributions to Grand Lodge. Maybe it could only afford this because of its members’ nefarious enterprises – the Lodge of Probity usually failed to make any contributions at all !!

One of the first Initiates to the Bacchus Lodge, on 6 November 1769, was John Cockroft, aged 22, a “woollen manufacturer” of Sand Hall, Highroadwell in Halifax. A little over a month later, Bro. Cockroft was arrested on suspicion of ‘clipping’ gold guineas and was taken to York Castle. Following the sentencing of ‘King’ David Hartley, the trials of over twenty other suspects, including Cockroft, were postponed and he was given bail. He then successfully evaded the law until 1778 when he was committed to Lancaster Castle for trial on a charge of forging half-pence coins but, luckily for him, he was acquitted as a result of a technical flaw in the indictment.

In 1782, he was again caught – ‘red-handed’ this time  – when, in the words of the prosecutor, “he was surprised at Work in his Garret being then edging blank Counterfeit Shillings by means of his throw Wheel and a File, which he had not time to part with, but on his Wife giving the Alarm, he leap’d down at a trap door with the File in his Hand, which from its’ being silver’d over, plainly shew’d the Business he had been at, and indeed the state of his Workboard plainly proved he was taken in full Business, for there were no fewer than 449 Counterfeit Shillings without Impression mostly finished, but some in part finished”.

The coins were made “in Imitation of old bare shillings which have lost their Impression….as these he thought pass’d better in general than Counterfeits with an Impression upon them….he thought it more safe to make them than Counterfeits with Impressions, as they required no coining Press Dyes or other Implements which would be the means of conviction, if found…. he finished them by means of Steel Rollers and a Throw Wheel which might be used in Button-making as well as in Coining — but not at all applicable to his Business of a Woollen Manufacturer “.

Bro. Cockroft’s luck appeared to have run out – he was found guilty of high treason and sentenced to death – but his good fortune hadn’t completely deserted him and the sentence was later commuted to transportation for life to a government settlement in East Africa.

Bacchus Lodge again came to the attention of Grand Lodge when it made a complaint against ‘The Old Cock Lodge’ concerning the ‘un-genteel treatment’ of one of their brethren who had attended a St John’s day festival.  There doesn’t seem to have been a Lodge of that name, but ‘The Old Cock Inn’, which is still in business in the town, is where the Lodge of Probity met at the time.  Just what this ‘un-genteel treatment’ involved is not clear, but, after an appeal to Grand Lodge, the Bacchus Lodge was finally erased as being ‘a disgrace to Masonry’ in April 1783, the year following Bro. Cockroft’s conviction.

‘The Old Cock Inn’, pictured above, is also where ‘King’ David Hartley was arrested and where, in 1852, a group of worthy men formed what became the ‘Halifax Permanent Benefit Building Society’ (now part of Lloyds TSB). Some might say that, by the year 2010, ‘The Halifax’, through greed and dodgy dealings, had incurred a cost to the state even more vast than that of the coiners!

‘King’ David Hartley and several other ‘Cragg Vale Coiners’ had been arrested, convicted and hanged in 1769/70 through the work of excise officer William Deighton (or Dighton) who was subsequently shot dead – allegedly at the instigation of Hartley’s family who put a price of 100 guineas on Deighton’s head. The murder was committed at a location at, or very close to, the present position of the Blackwall Masonic Hall in Bull Close Lane, Halifax which is the current home of De Warren 1302, St John’s 1736, Rokeby 6301, Heatherstone Savile RA Chapter 1302 and the Garuda Temple No 1 of the ‘The August Order of Light’.

One of the men suspected of the murder, Matthew Normanton, went on the run, whilst the other man, Robert Thomas, was caught but acquitted due to lack of evidence.  A witness later came forward who had been their ‘look-out’ at the murder and Thomas was then convicted of robbing the dead man (he could not be re-tried for the murder).   He was hanged in York in August 1774 and his body was then brought back to Halifax and hung in chains on Beacon Hill, which overlooks the town, with his right arm strapped to stretch out with the finger pointing to the murder scene in Bull Close Lane.

Matthew Normanton was captured in 1775 and he too was hanged in York and his body hung in chains next to the rotting corpse of his accomplice, Robert Thomas.

Halifax is overlooked by Beacon Hill where the bodies of the hanged murderers were hung in chains – one with an arm and finger strapped up to point at the murder scene!

Some of our more sensitive brethren (myself included) have had odd experiences at Blackwall Hall, but, if it is haunted, we’re not sure whether the ghost is the murder victim, William Deighton, or his murderer with the pointing finger, Robert Thomas. Well-intentioned visitors are always welcome!

View all posts by Peter Reeve